What on earth is a bOble?

bObles are "high end, multifunctional tumbling furniture"... at least that is the definition I read recently.

And yes, that definition is definitely true.  But bObles are somehow so much more, and the more I use them myself and with children, the more ways I discover they can be used.  bObles are designed after animals, so they seem to take on an endearing nature.  They feel soft and suede like to touch so you want to stroke them, lay on them and sit on them.  But they are heavy duty non-toxic foam, and even our volcanic red soil will wipe off easily with soapy water. 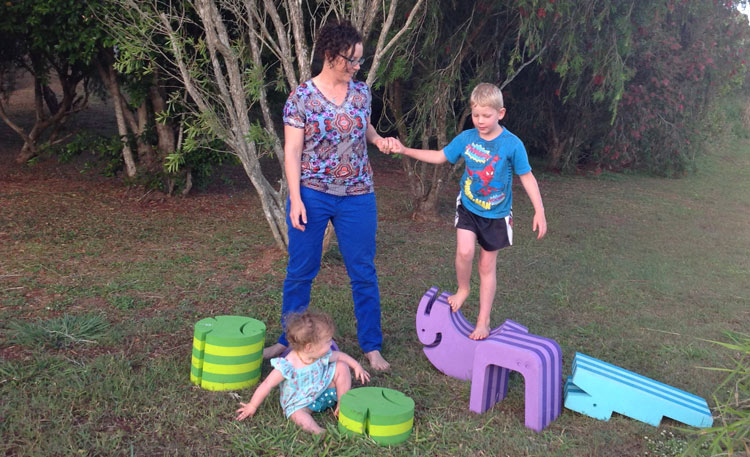 bObles were designed by a Danish paediatric physiotherapist who believed that children's furniture shouldn't look like miniature adult furniture.  She was also stuck inside in wet weather for an extended time with her own young children... and bObles were born. They are very popular in Denmark, but have only recently made their way to Australia.

Her intention was to make furniture, but once again I find myself saying "bObles are so much more".  bObles are designed so that children will be active rather than sitting still.  I have to be honest and say one of the most common referrals I receive in my practice is related to children who "can't sit still"... and bObles actually allows them to move, wiggle, balance and rock while sitting. They encourage development of flexibility and core strength, and somehow it feels like you are having more fun doing what you are doing, just because a bOble is involved.

A couple of studies have looked at whole classes of children using worm bObles as seats.  One study found improvements in fine and gross motor skills in the children using the worm.  Another project found that a teacher who had a class with children with worm bOble seats had to prepare an hours extra work per day as children were much more able to concentrate.  She said it did take a while for her to get used to the class looking like a sea of worms - as they seemed to be moving around constantly.  She allowed them to use it when they were at their seat or on the carpet, so children used it very creatively - sometimes sitting on it sideways, sometimes rocking on it, sometimes laying over it backwards.  But the teacher then realised that somehow, whether it was the movement, the rocking or the way they could sit in different creative positions... somehow they were actually concentrating more, getting more done, and having more fun with their own worms.  And they each grew quite attached to their worms over time too!

In my own family my 1 year old has progressed from crawling to walking to climbing and rocking with bObles.  My 4 and 6 year old love swapping dining chairs for various combinations of bObles.  My 9 year old and 11 year old enjoy making obstacle courses to challenge themselves (and challenge their mother).  And I even find myself switching my office chair for a few bObles if I have a big day of paperwork ahead of me.

For our family some experiences with toys and activities have been very unsatisfying - the kids are bored or the toys are broken far too quickly.  But there are some things that have lasted really well, that are used constantly, and that I'm always borrowing from my own children to use in therapy sessions.  And bObles are definitely in that category.

Is your child having difficulty with pencil paper tasks?  Read more about pencil grip or fun ways to encourage pencil paper skills.

The information, including but not limited to text, graphics, images, and other material contained on this website are for informational purposes only. This website is not intended to be a substitute for professional medical, healthcare or educational advice, diagnosis, or treatment. Always seek the advice of a qualified healthcare provider for any questions you may have regarding you or your child’s health concerns, and never disregard professional medical advice or delay in seeking it because of something you have read on this website.

If you enjoy my posts, signup to receive updates